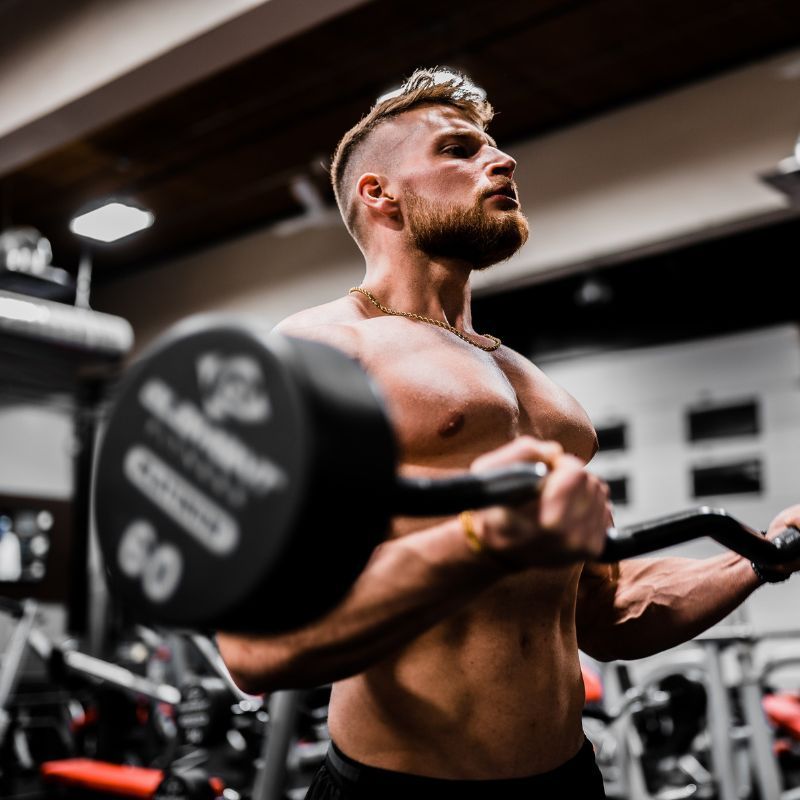 Powerlifting isn’t just for insanely strong fitness pros. Learn the benefits of trying the strength sport and how you can get started.

Shortly after throwing dumbbells and kettlebells into your workouts, there’s a good chance you’ll catch the weightlifting bug and feel compelled to lift progressively heavier and heavier loads. And at some point, you might even imagine yourself squatting with fully loaded barbells and benching 100-plus pounds without breaking a sweat.

One way you can turn that fantasy into a reality — and feel like a total badass? Take up powerlifting. Here, strength coaches break down everything you need to know about the sport, including what powerlifting entails, the exercises involved, its benefits, and how to get started when you’re a complete newbie.

Powerlifting is an individual strength sport that’s centred on three exercises: the barbell back squat, barbell bench press, and barbell deadlift, says Natalie Ribble, M.S., C.S.C.S., a certified personal trainer, powerlifter, and body-neutral strength coach in Seattle. In a meet, you’ll compete against folks in the same weight class, gender, and/or age group, and you’ll perform just three lifts for each exercise, with a short break in between reps and a longer rest period between movements. (The exact amount of time depends on the number of athletes competing.)

The goal: to lift as much weight as possible for one single rep (known as your one-rep max). The heaviest lift you perform with good form for each exercise is counted toward your total, says Ribble. The athlete who has the highest total wins the competition, but that’s not the only way you can measure your success, says Ribble. You can aim to complete all nine of your lifts for the day with good form, you can strive to qualify for certain competitions, or you can try to set PRs for specific lifts or your total, she explains. “A lot of times it’s framed as competing against yourself and your past self, and just being able to do a little bit better than the time before,” she adds.

As mentioned, the main powerlifting exercises are the back squat, bench, and deadlift. While the exercises are standardised, you can switch them up slightly with different stances, grips, and barbell positions. Specifically, most athletes perform a low-bar back squat, in which the barbell rests lower on your shoulders (think: across your rear delts), rather than a high-bar squat, a variation most folks start off with when they’re learning how to use barbells, says Laura Su, C.S.C.S., a strength and conditioning coach and powerlifter in Seattle.

You can also perform your deadlift with conventional stance or sumo-style, which involves standing with your feet wider than shoulder-width apart and toes pointed out, she says. “You commonly see smaller lifters doing sumo deadlifts just because you can get better leverage and lift more weight,” adds Su. “You want to use the stance that gives you the biggest deadlift.” The same idea applies for the bench press; athletes will commonly use wider grips at powerlifting competitions, as it reduces the range of motion and optimises your leverage, says Su.

While simply failing to lift the barbell can cause you to “miss” your lift, it’s not the only reason your rep may not count. You can also be docked if your technique doesn’t meet the sport’s standards (think: squatting until your hip crease dips below the top of your knee, briefly resting the bar on your legs as you deadlift), says Ribble. Downward bar movements are also a no-no, so as you bench, you can’t momentarily lower the bar to your chest and then continue pressing upward, she adds.

To make matters even more complex, you also need to follow commands from the three judges; during the bench press, for example, they’ll tell you when to lower the bar to your chest, press it up to the ceiling, and re-rack it. Jump the gun on any of those steps, and your lift will be considered a miss, says Ribble. Thanks to all these technicalities, it’s not uncommon for even experienced powerlifters to fail a lift, she adds.

And that’s why the weight you choose to open your set with is particularly important. “If you set your squat opener to too high of a weight, and you try and miss it three times, that’s what we call ‘bombing out’ and usually you cannot continue to compete [in the meet],” says Ribble. To minimise that risk, you’ll want to start with a weight you know you can perform two to three reps with, even on your worst day, she explains.

How well you perform with that first rep will dictate the weight you use next. If you perform the rep a bit slower than expected, you might choose a smaller increase in weight for your second lift. Or, if you wrap up that first rep feeling like you’re unstoppable, you might make a larger jump in your weight, says Ribble. That said, “some people like to PR and think that if they don’t fail a lift, that means they didn’t push hard enough,” she adds. “So they will make bigger jumps, take a bigger second attempt, and then a lot of times, fail their third attempt because they get a bit cocky.”

Whether you’re practising powerlifting for a competition or to simply spice up your usual workout routine, you’ll score a few key perks.

Lifting massive weights on the reg not only improves your strength (read: the ability of your muscles to create enough tension to overcome an external load or force), but it can also give your health a boost, says Su. For starters, stressing your bones via lifting heavy weights can increase your bone mineral density, which can reduce the risk of osteoporosis, she says. Plus, strength training helps build strength in your bones and connective tissues, which can decrease your risk of injury, according to the American Council on Exercise.

Practising the three main powerlifting exercises not only improves your performance in the gym, but it can also make your day-to-day life easier, as they mimic everyday movement patterns, says Su. You might hinge at the hips and reach your arms down to pick up a heavy laundry basket off the floor, essentially performing a deadlift. You push your arms in front of your chest to walk your child’s bulky stroller up a hill, just like you would push a barbell to the ceiling during a bench press. And you squat down to the floor to pet your pup or tie your shoe practically every day.

No matter how much weight you have on the bar or how well you perform in a competition, powerlifting gives you the opportunity to see just how much mental and physical strength you have. “I think people don’t ever realise how strong they are — they say, ‘I couldn’t ever do that,’” says Ribble. “But when they start, it creates this huge sense of self-confidence and self-trust, [they realise], ‘I can do things I never thought I was capable of.’ And that just trickles into every aspect of your life.”

What’s more, the sport is rich in body and age diversity, which can help you accept and love yourself as is. “I think it’s so cool that there’s not a body type for powerlifting,” says Ribble. “Even though you do compete in weight classes, generally speaking, it’s not advantageous to try to be the smallest weight class that you can. It takes emphasis away from being the smallest or leanest version of yourself. None of those things inherently make you a better powerlifter.”

The general training plan for a powerlifting competition

While the training program leading up to a competition varies from coach to coach, generally, you’ll start seriously prepping about 10 weeks prior to the meet, says Su. First, you’ll focus on gaining muscle by performing a greater number of reps (think: eight to 12) with a lighter load, says Ribble. Then, you’ll gradually amp up the intensity of your lifts while reducing the volume (think: two to six reps), practising the competition-specific exercises, and running through commands as if a judge were in front of you, says Su. You’ll still do some non-barbell accessory moves, though, in order to pinpoint weaknesses and counter any muscle imbalances, says Su.

“About two weeks before your meet day, you’re going to push really hard and do a lot of heavy single [reps] — basically strategically push your body past its ability to recover fully,” says Ribble. “Then you taper, cutting the volume way back the week of your meet. That allows your body to go through super-compensation, so it recovers even better than it would normally.” After that, you’ll take a few days off from lifting and finally hit the competition platform.

At any stage in your training, make an effort to put yourself in uncomfortable positions while lifting, such as having a stranger spot your squat or a bunch of friends watch your one-rep max attempt, suggests Ribble. “Doing things that made me feel a little bit anxious helped me learn how to calm those nerves and still perform under that pressure,” she says. “So when I got out on the platform [at a competition], I was prepared for it.”

How to get started with powerlifting

Ready to give powerlifting the old college try? First things first, start training with a barbell — even if it’s not loaded with additional weight, suggests Ribble. If you enjoy it, then hire a coach, either online or IRL, particularly if you’re serious about competing, she says. “There are a lot of logistics to navigate at a meet and it can be intimidating, so having someone to help you out with programming, coaching you through your technique, and helping you [at the competition] is helpful,” adds Su.

If you’re on the fence about competing, check out or participate in a local non-sanctioned meet, suggests Ribble. “In order to compete in one of the big federations’ competitions, you have to be a member and they’re expensive,” she says. “Local meets that give you a taste of what powerlifting looks like. It will be run very similarly to a sanctioned powerlifting meet, without the pressure or cost of the national federation.”

And most importantly, don’t allow any of your insecurities stop you from dipping your toes into powerlifting. “Don’t think that you have to get your body weight to a certain weight or get your numbers on the bar to a certain weight because you can start at any point,” says Su. “The biggest thing is just to try.”

This story first appeared on www.shape.com

Shape and the Shape Logo are registered trademarks of Meredith Corporation. Used under License.