While the oddities surrounding the current high school football season pales in comparison to last year, a familiar and unwanted narrative opened 2021 postseason play as Fairview forfeited its Class 5A first round game due to COVID-19 circumstances.

Via Twitter, the Knights announced the news Friday morning before their 7 p.m. scheduled kickoff against ThunderRidge saying, “We are sad to report that our football team will be forfeiting tonight’s playoff game against @TRidgeGrizzlies due to several confirmed cases of COVID-19. This has been a tough and resilient team throughout the season and they have made our school and community proud.”

The desolate preface served as a reminder of last year when Mead dropped out of the 3A field due to exposure inside the program as well as the continued fragile state of high school sports amid the pandemic.

It means for all local teams living by each moment in the win-or-go-home postseason, strength and perspective will be essential regardless of the result.

Today, let’s take a deeper look at the state of each of the six local 5A and 4A postseason teams.

(For potential area 3A playoff teams Mead, Frederick and Holy Family, their postseason journeys will begin next week. In their regular-season finales, 3A No. 7 Frederick beat No. 4 Mead and No. 6 Holy Family fell to No. 3 Fort Morgan.)

Broomfield EaglesWhere are they now: The No. 18 Eagles fell to 15th-ranked Longmont, 25-22, in the opening round of the 4A playoffs at Everly-Montgomery Field Friday night.How’d they get here: Broomfield proved plenty of moxie this fall, regrouping after a 1-4 start to win four of its last five games to reach the postseason for a sixth straight season. Against Longmont, it trailed 25-14 midway through the fourth but rallied back to give themselves a shot to tie or win the game with a drive starting around midfield with 1:19 remaining.Reason for cheer: Junior QB Cole LaCrue is eligible to return after he threw for 21 touchdowns in 2021. Senior receiver/cornerback Josh Dunn, meanwhile, ended his high school career among the top receivers in the state in 2021, hauling in 53 catches for 1010 yards and 13 TDs. Another senior, Bode Hogan, finished his career with 115 tackles this fall, second-most in 4A.

Erie TigersWhere are they now: Ranked No. 5 in 4A, they received a first-round bye and will host No.12 Fruita Monument next week with a spot in the quarterfinals on the line.How’d they get here: By running through everyone on their schedule. The Tigers were unmatched during their perfect 10-0 regular-season campaign, outscoring teams 465-124.Reason for cheer: They certainly have the weapons to make a title run. Sophomore QB Blake Barnett threw for 23 touchdowns and rushed for another 16 scores, while standout senior RB Caleb Theisen averaged nearly 13 yards per touch (1,324 yards on 115 carries, 307 yards on 12 receptions) with 21 total TDs. Ryan McConnell is a threat at linebacker, center and kick returner and Kansas State commit John Pastore is unquestionably one of the best linemen in the state.

Fairview KnightsWhere are they now: Out of the 5A postseason before a single snap due to COVID-19 cases and quarantines inside the program.How’d they get here: Before their unexpected exit, the Knights claimed the 22nd seed in the postseason thanks to a 4-1 record at home and an offense that had more than 300 passing yards in six of 10 games.Reason for cheer: Coach Tom McCartney and his typical pass-first and foremost offense could have quarterback Bekkem Kritza for three more seasons. In his debut, the freshman led the state with 3,192 yards through the regular season and 22 touchdowns to just eight interceptions. Then there’s Grant Page, who put an exclamation point on a stellar career in 2021. He’ll continue his football career at Nebraska.

Legacy LightningWhere are they now: The Lightning, ranked 15th, hosted Mountain Vista Saturday afternoon. The Golden Eagles stunned the Lightning, however, building a 28-3 lead before eventually getting a 42-17 win.How’d they get here: Braelon Tate and Legacy’s run game was a big reason why. The senior had seven 100-yard games on the ground in the regular season, finishing it with nearly 1,400 yards and 17 total TDs.Reason for cheer: The seniors. Along with Tate, the senior leadership ran through guys like Mason Dickerson, Braden Keith and Michael McCarty in the regular season. All four of those guys helped Legacy wipe away a 1-3 start, winning five of its last six to reach the playoffs.

Longmont TrojansWhere are they now: Ranked No. 15 in 4A, the Trojans beat Broomfield, 25-22, Friday night in the opening round and will face No. 2 Dakota Ridge next week.How’d they get here: Longmont dealt with COVID-19 exposure issues early in the season but got healthy and went on a roll following a 1-3 start. In Round 1, Keegan Patterson had nearly 500 yards of total offense and scored three more times, giving him 45 TDs on the season.Reason for cheer: The Trojans can rack up points in a hurry as they netted 40 or more in four of their last five games during the regular season. Much of the credit goes to star quarterback Patterson, who has more than 3,941 total yards. Meanwhile, Jack Moll and Caleb Johnson each have more 1,000 receiving yards this fall.

Skyline FalconsWhere are they now: Out of the 4A postseason after falling to Visa Ridge, 43-14, Friday night.How’d they get here: The Falcons were hit with tragedy in early September when 17-year-old player Savion Lowe died. With his name a constant around the program, the Falcons returned to the postseason.Reason for cheer: Another year of Logan Miller. The junior, who a season ago started his varsity career by scoring four times in four different ways — interception, fumble, throw, catch — in a Week 1 win over Silver Creek, hasn’t slowed the pace down much. During the 2021 regular season, Mr. Box Score had 420 passing yards, 476 rushing yards, 580 receiving yards, 396 return yards, 11 touchdowns and an interception. 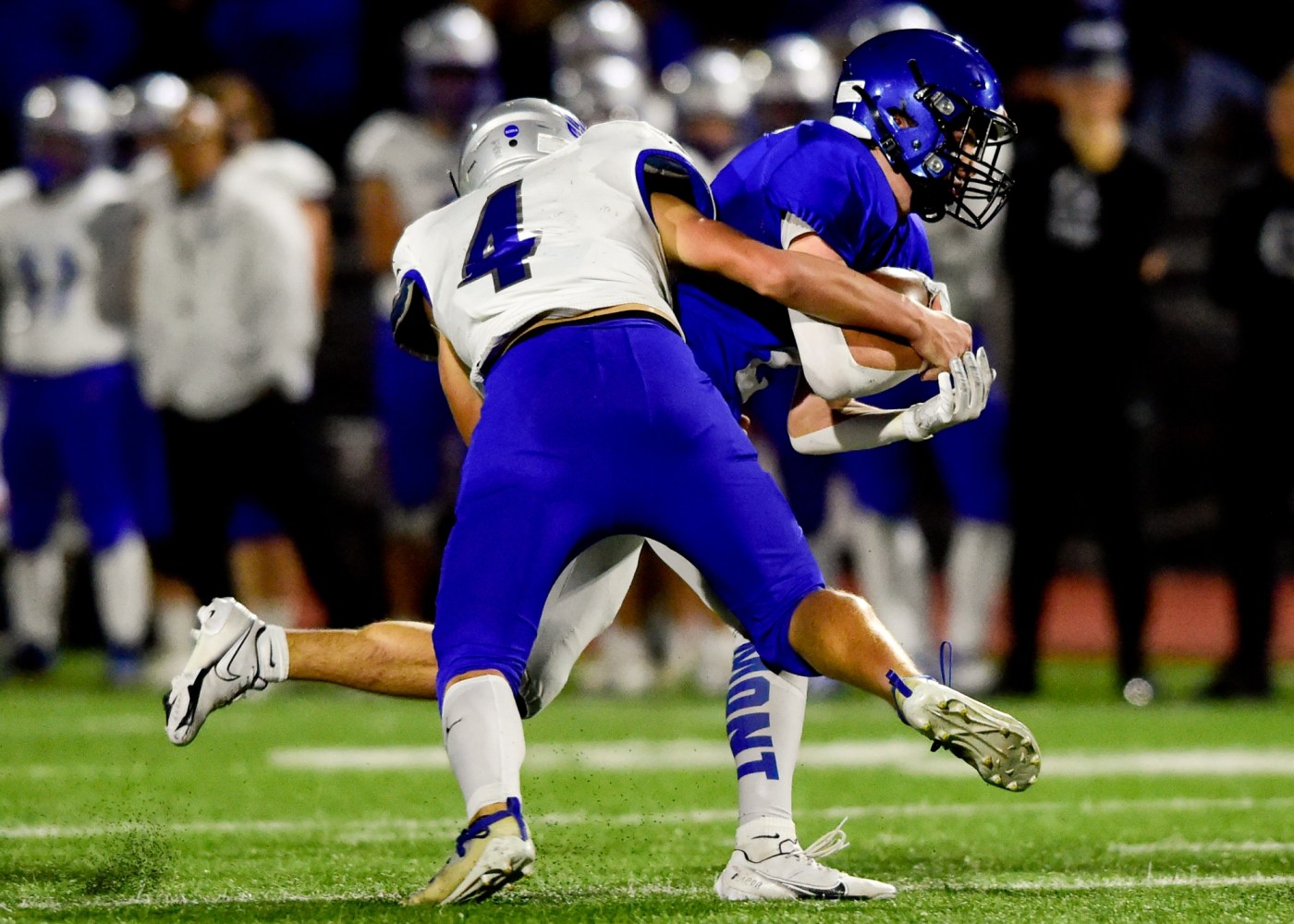