After 35 days of isolation, I’ve made 35 different dishes with not much abatement in sight. In fact, my “no recipe duplication challenge” has only just hit 2nd gear. Still so much to cook, eat (and clean up) until New York’s restaurant scene re-emerges.  Here are this past week’s sweet and savory delights.

I cannot begin to describe the most amazing garlicky, gingery, chili aromas that emanate from the kitchen with this all-in-one roast chicken and potatoes, but the fact that it takes nearly 3 hours to do so makes for some very envious neighbors. A great meal for a Sunday night where you have the time to work up a furious appetite.

Do Ahead: Chicken can be seasoned 12 hours ahead. Chill chicken if you’re not going to cook within 2 hours of seasoning.

Place a rack in middle of oven; preheat to 300°. Pat chicken dry with paper towels. Place on a small rimmed baking sheet. Season whole chicken all over with 1 Tbsp kosher salt and lots of freshly ground black pepper, making sure to season the inside cavity.

Cut what’s left of the head of garlic in half crosswise. Repeat with the second and third heads as well. Stuff 2 garlic head halves (or individual close if they come apart) inside cavity of chicken. Tie legs together with kitchen twine.

Using a pastry brush, brush half of gochujang oil over chicken.

Arrange potatoes in a 12″ cast-iron skillet, scooting them toward edges of pan to make space for chicken. Nestle as many garlic halves (cut sides down) as needed in center of skillet. Stand the chicken on top of the garlic halves—as it roasts, it will infuse the fat (and thus, the potatoes) with flavor. If any potatoes have shimmied their way under the chicken, use tongs to arrange them around it (they won’t cook at the same rate if they’re underneath the chicken).

Roast chicken and potatoes, turning potatoes once or twice to coat in juices and oil that accumulate in pan, until potatoes are very tender when pressed with the back of a spoon, and chicken skin is deep reddish-golden brown in color, 2½–3 hours. When you wiggle the legs of the chicken, they should feel loose in the joints, meaning the meat is fall-apart tender. Transfer chicken to a cutting board and let rest 10–15 minutes.

Meanwhile, use the back of a large spoon or a potato masher to gently smash potatoes in skillet, exposing some of their flesh to juices underneath so they can soak them up.

Finish the potatoes: Thinly slice 5 scallions on a long diagonal. Cut 2 limes in half. Cut 1 half into wedges and set aside. Stir 2 tsp. honey and juice of remaining lime half into potatoes. Taste potatoes and season with more salt if needed. Scatter sliced scallions over potatoes.

Carve chicken, then arrange pieces over potatoes and scallions. Serve right out of skillet with remaining lime wedges alongside for squeezing, and squeeze out the sweet, slow-roasted garlic cloves as you wish. Serves 4-6.

It’s pretty hard to intimidate mussels. You can pretty much throw anything at them and they will thrive and survive. This dish has a one-two-punch from a pair of red-pepper sauces that crank the bivalves up 3 notches to a restaurant-quality dish with an impressive “wow” factor. (You’ll want to drink up the sauce when the mussels are gone.)

Mussels with Harissa and Basil

MUSSELS WITH HARISSA AND BASIL

Heat a large heavy-bottomed saucepan or Dutch oven over medium-high until very hot, about 3 minutes. Add mussels, and shake pan to arrange mussels in an even layer. Pour wine into pan, and cover with lid. Cook, shaking pan occasionally, until mussels begin to open, about 5 minutes. Stir in harissa and butter. Cover and cook, shaking pan occasionally, until mussels are completely open, about 2 minutes. Remove from heat, and discard any mussels that did not open. Stir in bell pepper puree. Using a slotted spoon, transfer mussels to deep bowls, and pour sauce from pan evenly over mussels. Sprinkle evenly with Thai basil leaves and pickled red onion petals. Serves 4.

I opted to keep things super simple for vegetarian day with these spicy, caramelized roasted yams that enjoy a bright and refreshing lime-flavored yogurt dressing to bring home the sweet, sour, tang and tart in a single mouthful. (The leftovers are great – sliced up in salads). 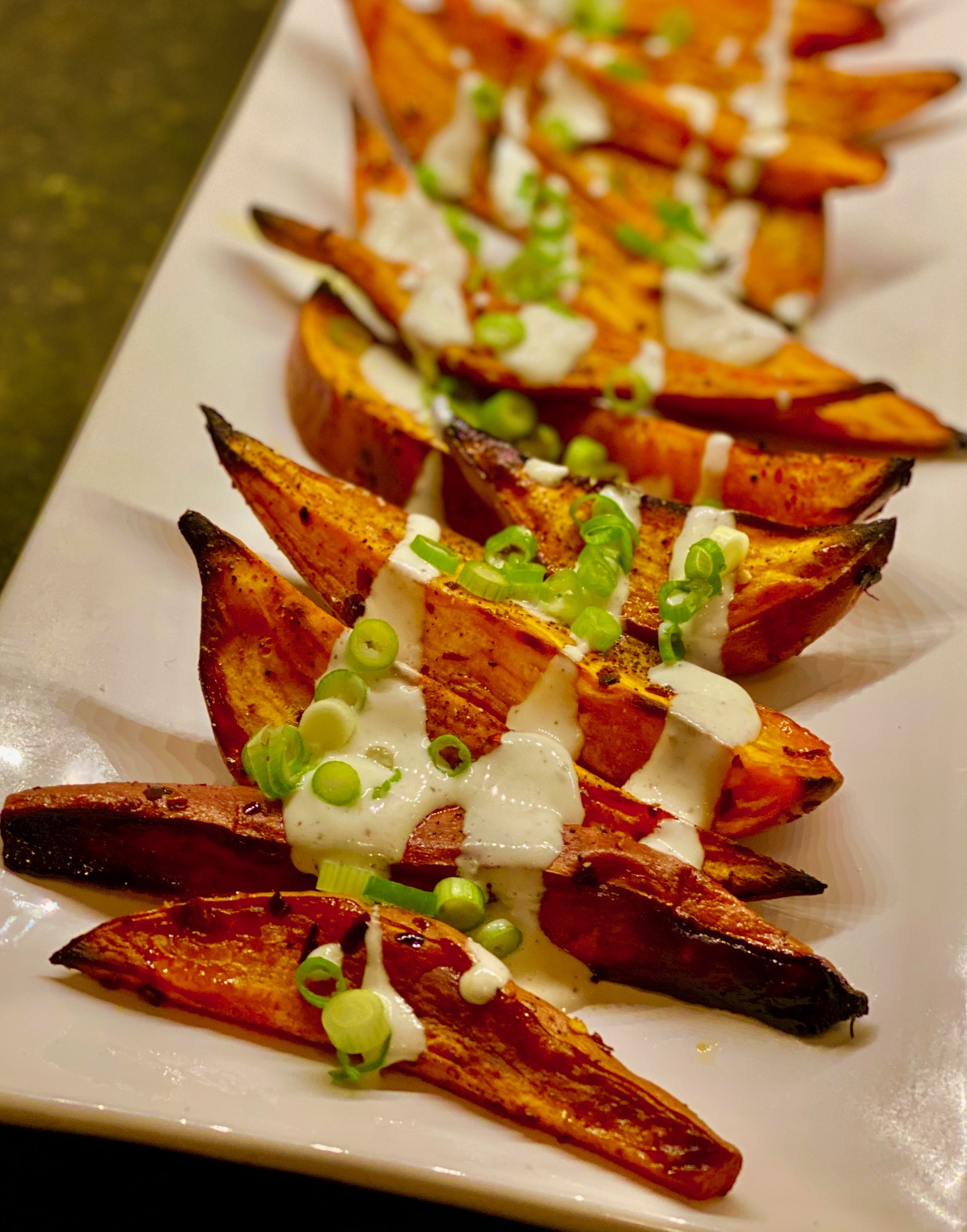 Heat oven to 425. Cut the yams lengthwise into 4 wedges per yam. Put them in a large bowl, and toss them with the honey, ½ tablespoon of the crushed red-pepper flakes and 2 tablespoons of the olive oil. Let it sit for 10 minutes or so, tossing once or twice to coat, as the oven heats.

Transfer the yams to a foil-lined, rimmed baking sheet, season with salt and pepper and then bake until they are deeply caramelized around the edges and soft when pierced with a fork at their thickest part, approximately 30 to 35 minutes.

As the yams roast, combine the yogurt, lime juice and remaining tablespoon of olive oil in a small bowl, and whisk to combine, then season with salt and pepper to taste. Set aside.

When the yams are done, transfer them to a serving platter, drizzle the yogurt over them and garnish with the remaining Espelette pepper or red-pepper flakes, the scallions and some flaky sea salt if you have any. Serves 4-6.

Seeing as there was a little gochujang left from Sunday’s chicken, I wrested this quick-and-easy recipe from virtual obscurity which makes a lonely pork-chop, a legend in his own lunchtime.

Use 1 tblspn of the oil to fry up the peanuts until they are golden brown. Drain on paper towels and sprinkle with the chili powder and set aside.
Whisk the gochujang, juice and mirin together.
Salt and pepper both sides of the chops.
Broil or fry in a cast iron skillet until well browned (about 4 minutes). Flip over and cook the other side. Smother the chops into the sauce (or pour over them while still in the pan) until well coated on both sides. Sprinkle with the peanuts and scallions. Serves 2.

Who would have predicted that the two scarcest commodities during the COVID-19 pandemic would turn out to be toilet-paper and yeast. I get the fact that we all have to poop, but since when did we all have to bake bread? I mean really! I’ve had the craving for a multi-layered-salami-and-cheese Muffuletta sandwich for some time now, but was determined to bake my own rosemary-lemon loaf. Who knew I would have to reach out to a shady character to score me a few grams of yeast from slightly north of the Mexico border?

Combine giardiniera, olives, bell peppers, parsley, capers, and garlic in a food processor. Pulse until finely chopped. Place mixture in a bowl; stir in oil and vinegar. Let stand 1 hour; cover and chill up to 2 days.

Cut bread in half horizontally. Tear away some of the soft bread interior to make some room for the fillings. Spread half of olive relish over bottom half of bread; top with half of cheese, all of the meats, and then the remaining cheese. Spread remaining olive relish on top half of bread, and close the sandwich. Wrap entire sandwich tightly in plastic wrap, and weigh it down slightly. Refrigerate 1 to 2 hours. Cut into 8 wedges. Serves 4.

Dumb question: Who doesn’t like fried chicken? But one of the many reasons I adore this 18 year-old recipe, is that even though the chicken cooks in the oven, the buttermilk and garlic brine is an iron-clad insurance policy that guarantees moist and tender breasts. You can pair this with any slaw, but I happen to love this red one.

Add the garlic, buttermilk and chicken to a zip lock bag and marinate in the refrigerator for at least 24 hours and up to 3 days.
Preheat the oven to 350 degrees.
Mix the Cajun spices with the flour in a bowl. Discard the garlic and buttermilk and dip each chicken breast into the flour mixture to thoroughly coat on all sides.
Heat the oil in a medium sized skillet on medium heat. Gently fry each breast for only 2 minutes on one aide. This step is purely for color. Using a spatula and tongs, very, very gently flip them over for another 2 minutes, taking care not to lose any of the fragile crust which is still very soft. Carefully transfer the breasts to a wire rack set over a baking sheet and bake in the oven for 25 – 35 minutes until they reach 165 degrees. Serves 4.

In a large bowl, whisk together vinegar and sugar until dissolved. Slowly whisk in oil, celery seed, salt and pepper to taste. Toss in cabbage, carrots, red onion and raisins to coat well. Cover and let sit at least 1 hour. Serves 6.

I dare you to throw away that old sweet and sour shrimp recipe you’ve been hanging onto all these years. It’s not as if it ever tasted remotely like the real thing anyway. This gem comes from a cooking class I attended in Hong Kong by a former Cantonese restaurateur who bragged that she had served over 500,000 of these during her career. (For a healthy alternative, substitute cauliflower rice for regular Jasmin). 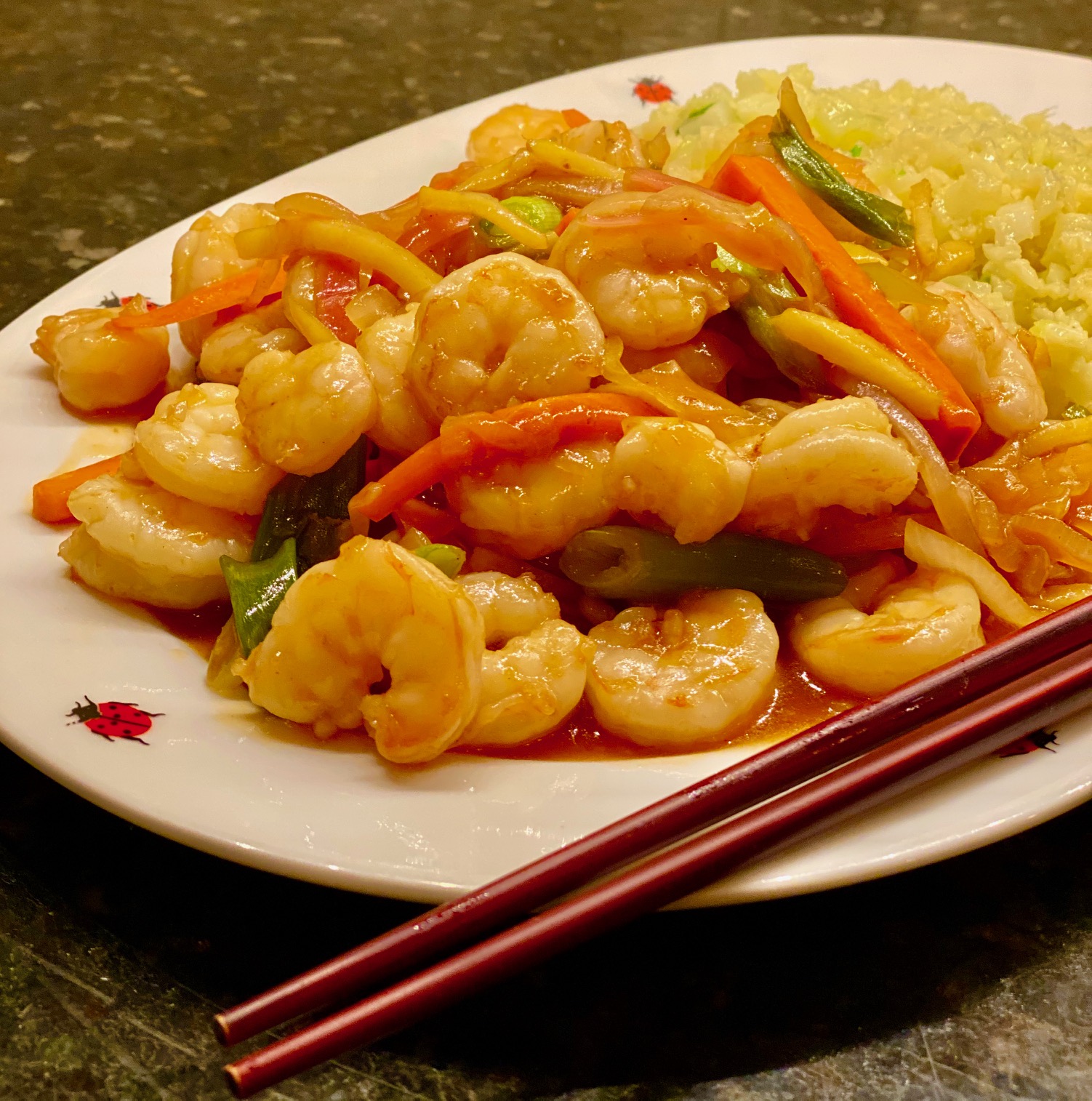 Stir the vinegar, sugar and the 3 sauces in a jug until well combined. Set aside.
Heat a wok over medium-high. Add the cooking oil and stir fry the onion, fresh ginger and garlic for 1 minute. Add the shrimp and toss for another 1 – 2 minutes.
Add the chilli peppers, pickled carrots and ginger. Keep tossing the ingredients. Add the sauce mixture and cook for about 3 – 5 minutes, stirring constantly.
In a small ramiken, dissolve the potato starch in the water and add to the wok to thicken. Remove from heat and add the spring onions and a dash of sesame oil. Toss once or twice more and serve immediately with rice. Serves 4.

Don’t you find that most Granola’s are nothing more than stale, brown crumbs and sawdust? After the endless additions I’ve made over the years, this one has become somewhat of a signature. But be warned, even though this insanely nutty Granola is intended for yogurt, fruit or ice-cream toppings, it is also a dangerously snackable snack. Keep out of reach of adults. 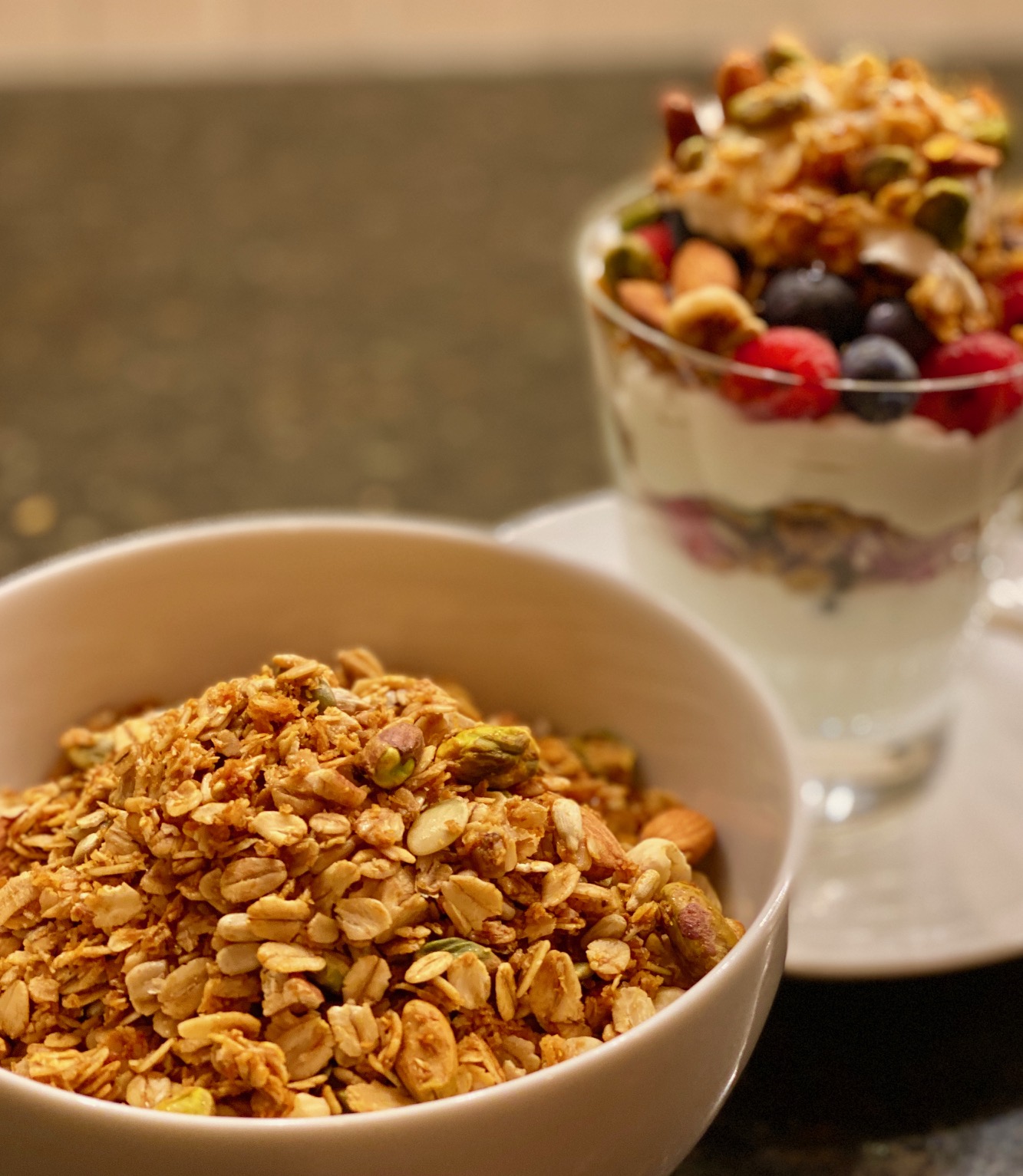 In a small saucepan set over low heat, warm the oil and molasses until just combined, then remove from heat. Fold liquids into the oat and nut mixture, making sure to coat all the dry ingredients well.

Line a large rimmed baking sheet with parchment paper or a silicone baking mat, and spread the granola over it. Flatten and smoothe to an even layer. Bake until dry and lightly golden for about 30 minutes, stirring around halfway through.

Remove granola from oven, and allow to thoroughly cool. Mix in the dried sour cherries and transfer to a storage container. Makes 6 cups.

Stay safe. Stay sane, but most importantly – stay inside!