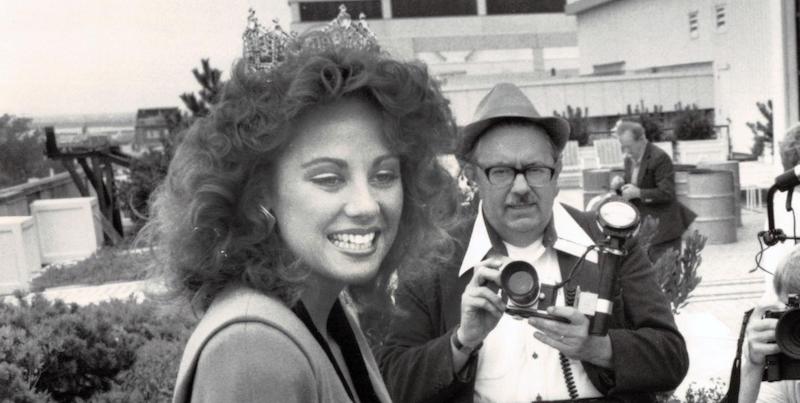 Leanza Cornett and the other Top 10 finalists were rushing to get ready for the evening gown competition at the September 1992 pageant, when she grabbed her red Bob Mackie gown with the puffy shoulders and metallic paisley trim, and—Wait, what??? The zipper was busted!?! Well, she would just have to wear her yellow gown instead her favorite, flattering, canary-yellow gown with the white-sequined bodice.

If you overlook the bugle beads and the shoulder pads, then Generation X arrived at Miss America in spirit—if not in aesthetics—the morning Miss Florida woke up and realized she really wanted to wear her yellow gown that night.

Problem was, Leanza had already filled out the form saying she would wear the red gown. But she changed her mind! She had worn her yellow one for the Boardwalk parade—accessorized with a fin, in a cute homage to her job as a Disney mermaid—and it felt so right. It was absolutely what she needed to wear in competition. The pageant staff, though, said it was too late to switch. Soooo, when no one was looking, Leanza took a pair of scissors and ripped out the zipper of her red Bob Mackie. And made a big, theatrical show of “discovering” it at the last minute.

“Nobody,” Leanza laughed 27 years later, finally ready to share the story, “is going to tell me.”

Something surprising happened to the pageant with this generation. The Miss Americas were suddenly sort of… cool? They rocked bikinis and even short hair. They said quotable things. They were a little more willful than their predecessors, and vivid in a way that helped sustain media attention throughout the year, even as TV ratings were beginning to droop.

“We liked that you didn’t need this,” one of Leanza’s judges later told her. They could tell: If they hadn’t voted her Miss America 1993, this tiny, self-possessed 21-year-old with Natalie Wood eyes would have been content to go back to starring as Ariel the singing mermaid at a Walt Disney World stage show and keep looking for her next thing.

Leanza made no bones about Miss America being a means to an end. “I want to be famous,” she said, joking-not-joking, and in 1993, those opportunities could still come Miss America’s way. As her reign neared an end, she won a role in a Broadway revival of Grease—such a plum achievement that the pageant planned a huge Grease-inspired song-and-dance for her farewell. Which ended up looking silly when Leanza decided at the last minute to take a job with Entertainment Tonight instead. Leonard Horn, the pageant’s chief executive, was not happy. She got to crown her successor, but he otherwise cut her out of the show.

What secured Leanza’s reputation as a rebel during her Miss America year was her advocacy work. When she was headed to Miss Florida for the third time, her local pageant director asked her to come up with a “platform “—the topic she would champion if she won, part of Miss America’s new service-minded initiative. She mentioned AIDS education, and her director winced: Did she have a second choice? AIDS was just so controversial…

“You know what? I don’t care,” Leanza recalled saying. “If this is not okay, this is not an organization I want to be a part of.”

As Miss America, Leanza visited schools across the country to talk about safe sex. She took the stage at a drag-show fundraiser in New York City and taught everyone how to do the pageant wave: “Elbow, elbow, wrist, wrist. Touch your pearls and blow a kiss!” When a rural school district in Florida refused to let her say “AIDS” during her speech, she played by their rules-and then promptly told her Rotary luncheon audience that same day how she had been censored.

“I can adhere to any school board’s needs,” she said at the lunch. “But I will not be an accomplice to the spread of this disease.”

And oh yes, it be came a big story. Soon, she was discussing the flap on CBS Morning News, and editorial writers across the country were hailing her moxie.

Leanza got branded as the “controversial” Miss America. Marian Bergeron, Miss America 1933, even called her “amoral.” (“Being Miss America certainly isn’t about condoms or whatever they are doing with them.”) But in 1993, controversy wasn’t so bad, as far as the organization was concerned. If a Miss America could make controversy, then Miss America still mattered.

It was Kaye Lani Rae Rafko who gave Leonard Horn the idea.

Miss America 1988 seemed like the others, at first. Tall. Blonde. Conservative. Like the previous six Miss Americas, Kaye Lani had won the swimsuit contest, and she had spent six years in pageantry before winning Miss Michigan, the kind of resume that could get you labeled a “Pageant Patty.”

But there was that exotic talent of hers, which—whew! It was a mesmerizing, hip-quivering Tahitian dance, which she performed in a towering pink headdress, a feathered skirt, and the longest unbroken expanse of bare torso that anyone ever saw at the pageant in those pre-bikini days. And then, when she met the press for the first time in September 1987, the conversation quickly turned to . . .  death?

“Death is a part of life,” she said. “And my job is to work with patients and families to accept it.”

At 24, Kaye Lani was already an oncology nurse who hoped to open a hospice for the terminally ill, and did she have some stories. The reporters were rapt.

Wow, thought Leonard. Why can’t we have this every year?

He usually hated these post-crowning press conferences, where reporters either fell back on rote questions about boyfriends and political stances or tried to make Miss America look like an idiot. (The following year, one reporter challenged Gretchen Carlson to identify which president was on a $20 bill and asked if she was a virgin.) But this beauty queen was talking about serious stuff. Hospice was a new concept in the

U.S., and Kaye Lani spoke passionately about it. She fielded questions on hot topics like assisted suicide, bone-marrow transplants, and HIV transmission, which she said the public shouldn’t fear from ordinary social contact.

“I have gone up to AIDS patients and held their hands and not worn gloves,” she explained.

The follow-up questions were smart and respectful. The stories the next day were glowing. And so was Leonard. Was this the solution to his Miss America problems?

A couple months earlier, he had been offered a plum appointment as a New Jersey Superior Court judge. But when he called longtime pageant chairman Al Marks to tell him he had to leave the board, Al begged him to stay. He was retiring after 28 years and wanted Leonard to take over. Leonard agonized over the decision. But lots of people get to be a judge, he reasoned. And there was only one head of the Miss America pageant.

And yet three years after the Vanessa Williams debacle, Miss America was facing even bigger problems. Cable TV was beginning to chip away at the ratings. The stodgy old broadcast, still carrying the flavor of a 1970s variety show, needed an update. And the contestants, sad to say, were part of the problem.

He called them “Stepford Wives”—stiff and over-rehearsed, with the hairstyles and wardrobes of women twice their age. Not their fault: This was how they had been groomed and trained by the generation of home-state honchos who had worked in beauty pageants since the 1950s or 60s.

“They didn’t look real,” Leonard says now. “And they weren’t comfortable in their façade.” The pageant was stuck worshipping an ideal of femininity—remote, glamorous, pristine-that made no sense for a generation of young women who had so many more options.

“Leonard,” Kaye Lani recalls saying. “do you think I’m the first woman to have an interest?”

A glitch at the next pageant brought him another bolt-of-lightning idea. When the time came for the accountants to hand Gary Collins the envelope with the results, they weren’t ready: A mathematical tie for second runner-up meant the judges had to vote again. During the eleven minutes it took to iron things out, Gary had no choice but to fill the dead air by simply talking with the ten finalists. On live TV! No scripts, no notes! He just asked them questions and let them answer.

Frankly, it was the most interesting thing to happen at the pageant in years, and Leonard resolved to work more spontaneous, off-the-cuff conversation into future pageants. These women had personalities, it turned out—why not show them off?

And over the next several years, he instituted a flurry of rule changes to try to break the stranglehold of the Stepford aesthetic: banning back­ stage stylists, so the women would have to do their own makeup; mandating that swimsuits be bought off the rack, instead of the custom-tailored girdle-like “supersuits” so popular through the 80s; opening the door to bikinis; and attempting, at least, to ban the insane practice of high heels with swimsuits. (That one didn’t stick; they all just walked on their toes instead.)

But first came Kaye Lani, a Miss America who was keynoting at health-care conferences about the nursing shortage that was hobbling community hospitals, and lobbying Capitol Hill to loosen visa restrictions on foreign nurses. Wherever Kaye Lani went, she made news. Leonard was stunned. All this positive press! How’d she come up with the idea to do all this?

“Leonard,” Kaye Lani recalls saying. “do you think I’m the first woman to have an interest?”

And that was it. Leonard got to work on a plan to have every title­holder devote her year to the worthy cause or mission of her choice. He had been dismayed by how much of the typical Miss America’s year was spent singing in shopping malls or signing autographs in drugstores. It seemed low-rent and irrelevant. What if Miss America promoted issues and ideas instead of brands, in business suits instead of sash-wrapped cocktail dresses?

In the 1990s, this advocacy work would imbue the title with a dignity it had lacked for a while. It may well have added a decade or two to the pageant’s life. That was Kaye Lani’s breakthrough.

She never stopped talking that year. Sent to sign autographs at some trade show, she would end up taking the mic to hold forth on hospice care. Booked for a shopping mall fashion show, she would look for a nearby high school and invite herself in to talk up nursing careers. The 1980s were a rough time to be Miss America, mired in debates about sexual morality and physical appearance. But Kaye Lani cried when she gave up her crown, and she cries a little now, three decades later, just to think of it. “I loved every minute,” she says.

The best way to change the conversation about Miss America, it turned out, was by having something to say. 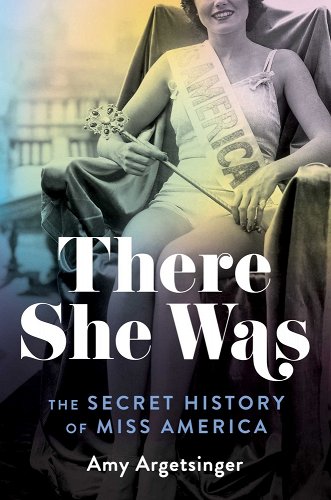 Excerpted from There She Was, published by One Signal/Atria Books, a division of Simon & Schuster, Inc. Copyright © 2021 by Amy Argetsinger.