Battle ropes have become ubiquitous in gyms around the world—CrossFit boxes, personal training boutiques, bootcamps, you name it.

If you’d asked someone what a “battle rope” was 10 to 15 years ago, though, they probably would have thought you were referring to some piece of military hardware.

So, why have battle ropes become so popular?

Simple—they’re a fun and effective way to build muscle, strength, and endurance (and burn a shedload of calories in the process).

What Are Battle Ropes?

Battle ropes—also known as battling ropes or heavy ropes—are a strength and conditioning tool primarily used for improving cardiovascular fitness. They’re typically made of heavy braided plastic thread, are 1.5-to-2 inches thick, 30-to-50 feet long, and weigh 15-to-50 pounds. The longer, thicker, and heavier the rope, the more physically demanding it is to use.

Although the name is plural, battle ropes are actually just one rope that’s anchored (normally to the floor or a wall) in the middle. This effectively creates two ropes that originate from the same point, but that can be manipulated independently.

A battle ropes workout typically consists of whipping, slamming, swinging, and dragging the ropes in a variety of ways, often in bouts of high intensity, followed by periods of rest (like other HIIT-style workouts).

Quickly calculate your calories, macros, and even micros for losing fat and building muscle.

Your free stuff is on the way!

What Are the Benefits of Battle Ropes?

As with most exercise equipment, there isn’t much research on battle ropes, but it’s fair to assume they’ll offer similar benefits to other forms of high-intensity cardio.

Here are the highlights.

VO2 max refers to the maximum amount of oxygen your body can use while you workout.

Increasing your body’s capacity to use oxygen is a guaranteed way to improve your endurance—a higher VO2 max delays the point at which you feel like you have to stop exercising.

Several studies show that battling ropes training is an effective way to increase your VO2 max.

As a rule, aerobic training isn’t effective for building muscle because it doesn’t create enough tension in your muscles to cause growth.

Research shows, however, that battling ropes training is an exception.

Basically, battle rope workouts blur the line between weightlifting and cardio, giving you some of the benefits of both styles of training.

That’s why you should strive to increase the intensity of your workouts over time. This is known as progressive overload, and it’s one of the best ways to maximize the muscle-building effects of exercise.

The best way to achieve progressive overload is to simply lift more weight, and battle ropes make this a cinch.

Because battle ropes come in a range of lengths and thicknesses, you can make your battle ropes workouts progressively more difficult, which is why research shows they’re effective at helping you build strength.

For example, in one study conducted by scientists at the University of Windsor, researchers had participants increase the weight of the rope they used halfway through a six-week battle ropes training program, and the final results showed that . . .

What Muscles Do Battle Ropes Work?

Studies show that the main muscles worked by battle ropes are the . . .

In other words, battle ropes give you a total body workout. 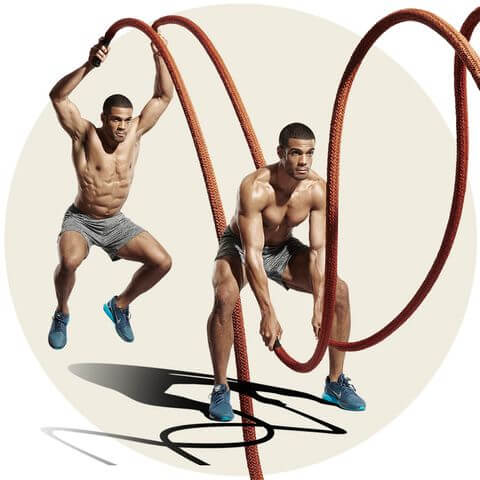 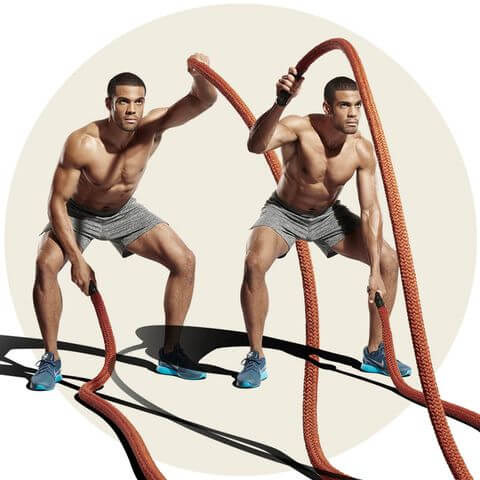 3. Side to Side Waves 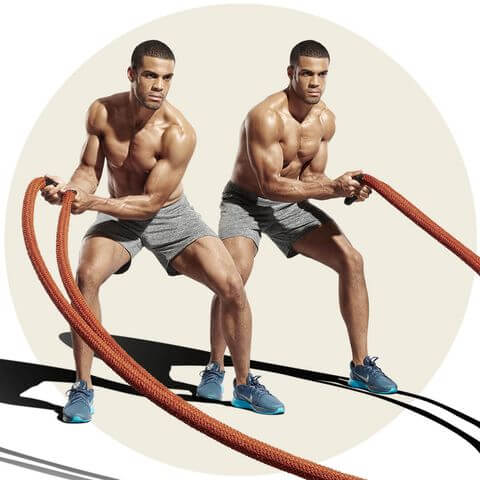 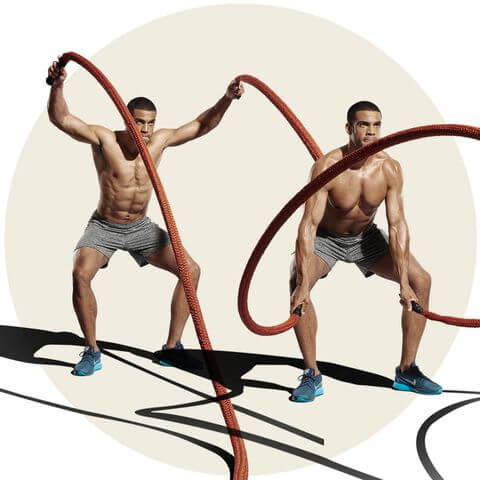 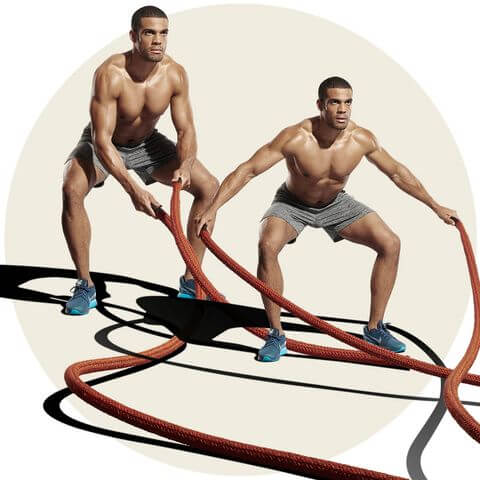 If you’re new to battling ropes training, this is a great workout to get you started.

Repeat the circuit three times for a total of 20 minutes of exercise.

If you want to kick the intensity up a notch, reduce your rest time to 40 seconds between exercises, or if you really want to push the envelope, use a 1:1 work to rest ratio—20 seconds on, then 20 seconds off.

FAQ #1: What are the best battle ropes for sale?

. . . which is why the GEARDO Battle Rope is a solid choice for your home gym.

FAQ #2: How do you anchor battle ropes?

Some people say you can anchor a battle rope by passing the rope through the handle of a heavy kettlebell, but I don’t recommend this as it can be unstable.

The best solution is to buy a battle rope hook which can be attached to a wall with nuts and bolts, or a battle rope anchor strap that can be wrapped around a heavy object like a squat rack. Or, you can buy some nylon webbing that you can use to tie the battle rope to something heavy or fixed to the floor (like a squat rack, the bumper of a car, etc.).

FAQ #3: How do you make your own battle ropes?

To make your own DIY battle ropes, all you need is a rope that’s 30-to-50-foot long and 1.5-to-2 inches thick, and a roll of heavy-duty athletic tape that you can wrap around the ends as handles.

Bear in mind, though, that DIY battle ropes aren’t protected by a cover, so they’re more susceptible to fraying and they won’t be suitable for outdoor use.