HANK PHILLIPPI RYAN: I love that I missed the posting deadline for this! It's so emblematic of the whole writing craziness. Because ---know what I did yesterday?

I SENT IN MY MANUSCRIPT!

THE FIRST DRAFT IS DONE! 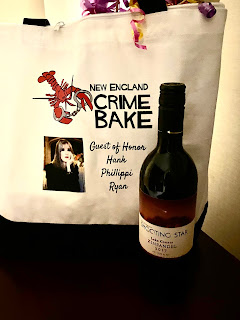 First: let me say how AMAZING it was to be the GUEST OF HONOR at Crimebake!

Here are some photos. The bag the committee put in my hotel room! 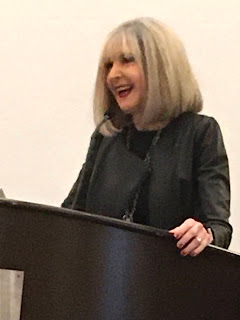 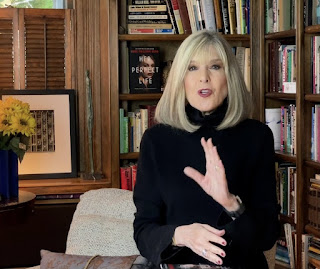 Doing my online session for virtual Crimebake. Which you can STILL watch! Hallie's too.  I'll put the link in the comments.

Ahd now, darling patient Reds and Readers. This is the FIRST DRAFT (which no one should ever see) of my new book. It'll be interesting to see how much, if ANY, of this lasts in the final version. And, as you can tell, it needs a new title.

Alyssa swirled the icy olives in her martini, thinking about division. She stared through her chilled glass at the mirrored shelves of multi-colored bottles in front of her at the hotel bar. Division, as in divorce. Not only the physical division, hers from Bill, but what would happen when the lawyers came. When they created a ledger of their lives together, then started the financial division. Followed by the devastating subtraction.

Bill had subtracted her from his life, that was easy math. With a lift of  his chin and a slam of the front door and a squeal of Mercedes brakes. She’d asked him why he was leaving her, begged to know, tried to understand. But Bill always got what he wanted, no explanation offered or obligatory. She had done nothing wrong. Zero. That’s what baffled her. Terrified her.

She jiggled the fragments of disappearing ice. Division. The Weston house. The Osterville cottage. The jewelry. Her jewelry. The first editions.  The important paintings. Club membership. The silver.  Money. The lawyers, human calculators who cared nothing about her, would discuss and divide and then, Bill Macallen would win. Bill always won.

All she’d done for the past eight years was addition. She’d added to their lives, added to their social sphere, organizing and planning as “Bill’s wife,” fulfilling her job to make him comfortable and enviable and the image of benevolent success. She’d accepted it, and all that came with it. And then, this.

I need a break, he’d told her that day. She pictured that moment now, a month ago, could almost smell him.  Bill talking down to her, literally and figuratively, wearing one of his pale blue shirts, elegant yellow tie all loose and careless, khaki pants and loafers. A break! As if his life with her was a video he could casually put on pause while he did more important things.  What things? Could knowing be worse than imagining?

Alyssa felt her shoulders sag, assessing the other parts of her life grouped on Bill’s side of the ledger. She understood, she did, it was difficult when a couple split. Allegiances were tested. Loyalties strained. She jabbed at the closest green olive with the little plastic stick. But Bill had taken the friends. She’d have thought some of them, at least, would’ve stuck with her.

But they’d all sided with Bill. Every single one of them. And now--at the club, at the gym, at the mall—all Alyssa got was pitying glances. Fingertip-hidden whispers. Unanswered calls.  As if they, in their hot-house world of affluence and connection, knew something she didn’t.

The music from the speakers in each corner of the Vermillion Hotel’s earnestly chic dark-paneled bar floated down over her, some unrecognizable tune, all piano and promises, muffling conversations and filling the silences. A couple sat at one end of the bar, knee to knee. On vacation, on business, clandestine. Impossible to tell. At the other end, a sport-coated man, tie loosened, used one finger to fish the maraschino cherry out of his brown drink, popped it into his mouth, and licked his fingers before he went back to scrolling the phone in front of him. Alyssa was in the middle. Alone. She drew in a deep breath, all peaty scotch and lemons and strangers and elusive perfume. Alone.

When she and Bill first met, that night at the charity event, they both had big plans. Now only he had them.  When she wasn’t Bill’s wife anymore, who was she? And did she have the power to change that?

Her phone lay face up on the zinc bar, its glowing green screen taunting her with the proof. No matter how many times she looked at it, her calendar messaged her new reality.

You have no events. No. Events. Only blank days, one after the other, calendared out in front of her.  She scrolled back through her past, the listings grayed out now, ghosts of occasions. Charity balls, gala dinners, speeches by successful entrepreneurs, justice-for-all somethings, and a fundraiser where they’d auctioned off A Day with Bill Macallen. That went for thousands. Everybody loved Bill, and somehow, calculating again, Alyssa always felt like the beloved plus-one. Now, in the excruciating math of marriage--addition, division--she was the minus.

Nothing had changed for him, now. Bill was always jetting off, to New York, or Chicago, or someplace exotic. She reached into the shoulder bag hanging from the curved back of her bar stool, slid her hand into a side pocket, and pulled out a postcard of a goofy monkey perched in a palm tree. Bill sent them just often enough to be manipulative; unsigned picture postcards of bananas and big fish and blue skies. Here’s where you aren’t, he was seeming to say. Here’s where you never will be again. Here in Weston, where she was, she had slush. Slush, punctuated by crocuses. Spring in Massachusetts.

She imagined Bill walking in and seeing her, alone on a Saturday night, on this well-worn stool at a suburban hotel bar. Brown roots showing. Manicure failing. Bare legs, and courtesy of the doomed-to-divorce diet, gone almost scrawny at five pounds thinner.  If Bill had caught her here—which he wouldn’t, she’d picked this place because no one came here--he’d have sneered that dismissive sneer at her vodka with three, now two, olives. Alyssa Westland Macallen, almost-divorced at 35. She swirled the ice again. Childless, friendless, pitiful. Her husband, fifteen years older, was off having all the fun. That didn’t seem fair.

“May I get you another, ma’am?” The bartender, all cheekbones and concern, paused, wiping out a champagne flute with a blue striped towel.

Ma’am, she thought. All she needed. Might as well have cliché stamped on her forehead.

She looked at her watch, pretending. “Oh no,” she said. Profoundly surprised. “How did it get to be so late? Everyone will be expecting me.”

“Ah.” The bartender held the flute up to the row of tiny lights twinkling above us. “Of course.”  Alyssa watched as he checked the glass for spots, then, turning away from her, slid the it into place on a thin wooden rack.

Bill. William Drew Macallen. Where are you? And with who? There could be no other reason but that he was tired of her. And on to wife number two.

Eight years three months and 27 days.  She stared at the pale place on her finger where her wedding ring used to be. A piece of jewelry the universe prescribes that means one is married, and happy and off-limits. There was no piece of jewelry denoting sorrow, or confusion, or disequilibrium. And now her once-welcoming, once-glamorous home was empty; and when the nights got dark and long, it terrified her. As if Bill were lurking. Watching. Waiting. Even when Bill was gone he was there. Present in every shadow. She hated being alone in that house. Hated it.

“No thanks,” she said to the bartender. “Just the check.”

The voice beside her--inquiring, hesitant--startled her.  She hadn’t noticed anyone walking up behind her,  and had deliberately left the black padded barstools on either side vacant, a barricade against intrusion or discussion. Or introduction. Alyssa was not here to find companionship or conversation. In fact, the last thing she wanted to do was talk to anyone. What would she even say? Even the simplest of questions—how are you?—could send her to tears.

The newcomer’s fingernails were bitten and nubby, and her pilling sweater just the wrong shade of blue and uneven across the shoulders. She slung a raveled canvas totebag over the back of her stool. Her curly-wild hairstyle had been an unfortunate decision, as was her hair’s not-quite-auburn color.